What You Should Know About the Proposed Capital Gains Tax Hike 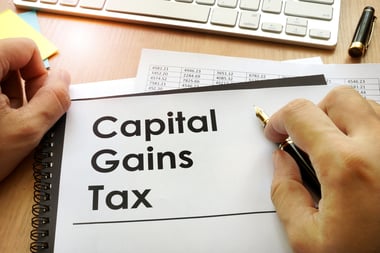 At the end of April, President Joe Biden unveiled details of a new plan that includes proposed changes to capital gains based on income levels. As we understand it, the changes proposed would be doubling capital gains taxes for investors making more than $1 million in order to fund his $1.8 trillion American Families Plan. What does this mean for you? Business owners looking to sell are often categorized as top earners, so, as we understand it, you might see less money in your pocket after the transaction if these tax changes go through.

Whether you’re a life safety company owner or a restaurant owner thinking of selling, let’s take a closer look at our view on the proposed changes and what the bill may mean for your as a business owner if you decide to sell in 2022.

What are Capital Gains?

A capital gain is the profit from the sale of a capital asset meaning the price at which an asset is purchased is the asset’s basis. In this instance, selling a business above its basis would be considered a capital gain. If this were the case, the business owner (seller) is then taxed on the profit, the difference between the sales prices and the basis.

There are two categories of capital gains: short-term and long-term. Short-term gains are profits from an asset sold within a year of buying said asset. Long-term gains are profits from assets held more than a year. No matter what category you fall into, both will be affected by the proposed tax hike since both would be taxed as ordinary income in the highest bracket.

Currently, the capital gains tax rate is at 20% for those making more than $445,850 a year. President Biden’s proposed hike increasing by 19% to 39.6%, almost doubling the current rate.

What Changes are in the Proposal?

Now that you have a better understanding of capital gains, here are a few relatable proposed changes the president has included in his plan.

Raising the top capital gains rate for households with more than $1 million in income. Already mentioned above, this proposed change would almost double the current rate on long-term capital gains, which is at 20%.

Deductions cap. The proposed deductions cap could mean that taxpayers would face a cap on their deductions, including charitable contributions as well as IRA/401k contributions. If someone pays the top tax rate, they will no longer get deductions applied at that full rate. They would instead be looking at a cap around 26 – 28%.

Capital gains taxation at death or gift. Currently, when someone dies, their appreciated assets get stepped up in value to their value at the date of their death. What does this mean? It means no capital gains are ever paid on the unrealized appreciation of the asset before said death. With the proposal, the unrealized capital gains would be taxable at death.

What Impact Do These Changes Have on You?

As a business thinking about selling your business, these proposed changes could have a significant impact. They would impact long-term capital gains by almost doubling for top income earners, meaning you. Business owners looking to sell often fall into this category. If you don’t earn more than $1 million in a year, here’s some good news. The capital gains tax hike is looking like it will remain the same for income earners below that $1 million threshold.

These proposed changes are just that – proposals. Nothing has been voted into law, but that doesn’t mean you should wait until it may be too late. If you have thought about selling your business, now’s the time to take action and start evaluating your goals, business, and the situation you are currently in.

It’s critical to take the time to fully understand what needs to happen before, during, and after a sale. Selling your business is not an easy decision and definitely not one to be made overnight, but it’s important to understand what, if any, implications may arise from this proposed tax increase. We are not tax experts, so it’s important you consult with your professional tax advisor for how this will impact your personal situation if signed into law.