What is a Deficiency: Everything You Need to Know 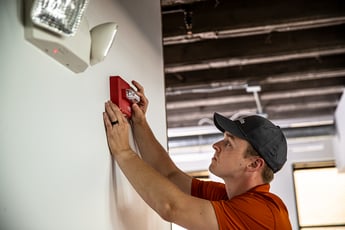 It’s commonly understood that fire protection systems are an essential part of any facility’s life safety program and should not be neglected. Building managers and owners need to know what the fire marshal and local Authority Having Jurisdiction (AHJ) are looking for when it comes to adhering to some of the most prominent and straightforward building fire safety regulations. It’s important to take these codes serious and know why deficiencies matter. Knowing the frequent fire code deficiencies found in businesses will help you pass fire safety inspections.

What is a deficiency?

There are three types of deficiencies: Inoperable, Deficient, and Suggested.

Deficient means your system is due for service and maintenance according to NFPA codes and regulations but is not operable. Deficient issues can prevent your system from working effectively in the case of an emergency. If there is an emergency, your insurance may not cover you and your assets if your system was found deficient. In order to rectify deficient issues, these deficiencies need to be repaired within a certain number of days, typically 10.

Suggested types of deficiencies are identified when there is an opportunity for preventative maintenance or increased protection, such as adding signage to a sprinkler room to clearly label all pipes and valves. These deficiencies are less threatening to the inhabitants of the building and mostly relate to correct signage or stickers. Suggested deficiencies are considered best practices and typically are considered in place to help people in the event of an emergency.

Below are some of the most common deficiencies for certain fire safety systems.

There are many components to fire alarms. Each with their own inspection cycle. Some can easily be overlooked through inspections and fall under deficiency. It’s important to have inspection performed by a professional so nothing is missed.

Fire sprinkler deficiencies can be all too common. All fire sprinkler systems need to be tested and regularly maintained to ensure the safety of all assets in the building.

A fire suppression system has built-in components that detect fires at the beginning stages through heat, smoke, and other warning signals. These are attached to an alarm system that will alert you when the fire has been detected and initiate steps for action to further suppress the fire. Suppression systems can easily malfunction if not maintained.

Fire extinguishers are often the first thing in fire safety people think of when there is a fire. It’s critical to have these inspected annually, but visually inspected monthly so they don’t become deficient.

Emergency and exit lighting devices often become damaged over time. By performing daily checks, you ensure these systems are clear and performing as they should. These should not be overlooked just because they are already visible to everyone.

Fire code deficiencies range from non-operable to suggested and each category has a variety of consequences related to them. All of these deficiencies can be avoided if you take the necessary steps in finding a preferred fire protection and life safety vendor to inspect, maintain, and manage your fire and safety systems. Hiring a preferred fire protection and life safety company ensures you and your company stay fire code compliant.