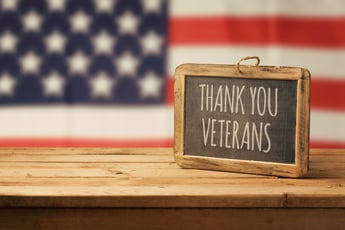 We at CertaSite value the sacrifice and service for all those that put it on the line to serve and protect the many liberties we celebrate daily. Especially on Veterans Day, we take time to remember the individuals who have protected our rights and freedoms, sacrificing their time, and in some cases their lives, serving the United States.

A little history lesson about Veterans Day, the holiday is celebrated every year on November 11th to commemorate the end of World War I on November 11, 1919. Veterans Day was first recognized in 1926 when Congress passed a resolution for an annual observance of the day, and it later became a national holiday in 1938.

Our veterans made a pledge to give everything in service to our country to protect every American's life, liberty, and pursuit of happiness. You can show gratitude for this sacrifice today and year-round in simple ways.

Veterans are all around us. Many spend years in the military but then go on to other careers or pursuits. On this day, we wanted to take a moment to honor our own veterans and thank them for all they've done not only for our company, but for the United States of America.

Jeff is a veteran of the United States Navy. He served our country as an interior communications electrician. Jeff served on the USS John Marshall SSN 611 submarine from 1986 - 1989 and received the sea service award, good conduct medal, and received a letter of commendation during one of his deployments to the Mediterranean Sea. Jeff was promoted to Petty Officer 2nd Class prior to his honorable discharge.

Bill's passion for keeping people safe was first cultivated in the military. He served 15 years active duty in the United States Navy, six years in the Kentucky Army National Guard, and three years in the Army Reserve. Most of his military service was focused on fire safety and life protection.

Bill joined the military after high school and grew up while travelling to see the world. In the military, he gained an appreciation for the people who like to be part of a team. "In the end, joining the military was the best decision of my life," Bill commented. "Camaraderie, friendships, life changing experiences that were pleasant and tragic, but through it all we were a team and proud to serve our country."

Thank You to All Our CertaSite Veterans

Thank you to all the veterans across the country for your service and sacrifice.