History of the Firehouse Dog

Dogs and firehouses are synonymous with each other. They go together like peanut butter and jelly. One reason we’re doing our CertaSite Serves Humane Society Donation Drive is to give some love to the animals who have had such a long and important history in the fire and life safety industry.

Dating back to the 1700s, dogs, more specifically Dalmatians, have been a staple inside the stations. A constant companion to those fighting blazing battles all day and all night. But how did this lovable pooch, and dogs in general, become the “mascot” so commonly seen at firehouses?

Carriages, Horses, and Dogs. Oh My!

In the mid-1700s, firehouse dogs were better known as carriage dogs. They consisted of different breeds that were more suitable to the lifestyle of a carriage dog. A successful carriage dog featured long legs, a sturdy body, high energy, motivation to please, endurance for a long journey and a great temperament and high level of obedience. One specific breed checked all the boxes: the Dalmatian.

When horse-drawn carriage became horse-drawn fire carriages in the late 1700s, these hardworking carriage dogs transitioned fire dogs. The Dalmatian was ideal for the job. They’re quick learners and embody a calming sense. Their calming nature during intense moments particularly came in handy when firefighters were battling a blaze. The Dalmatian stayed back with the horses and carriage to ease the horses’ stress. Thus, creating a tight bond between the two species. The Dalmatian even bunked in the stables with horses at night.

Dalmatians and horses were great partners. But eventually the need for horses became extinct when motorized vehicles cruised onto the scene. Without carriages, there was no need for a carriage dog. But unlike the horse, the Dalmatian remained. Only this time, the now known fire dog, who many were used to seeing side-by-side with firefighters, needed a new job.

With the roll-out of motorized fire engines, our lovable pup became affectionately known as an onsite firehouse companion and mascot, which is what we see today. When the Dalmatians were no longer needed as carriage dogs, their new tasks consisted of companionship to the firefighters, guarding all belongings in the firehouse, hunting rodents in the firehouse, riding along to fires and guarding the trucks, and acting as the firehouse mascot. While their roles may have changed, they excelled in these new ones. 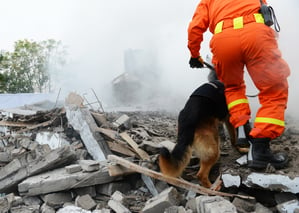 Throughout the next century and decades, while Dalmatians remained the firehouse staple, other dog breeds soon joined as firehouse mascots and companions. Nowadays, firehouse dogs have added a new title: educators. The dogs help firefighters demonstrate fire safety and emergency preparedness in schools and local communities. In addition, these highly intelligent animals also now act as accelerant-sniffing arson dogs. They are trained to investigate fire scenes alongside firefighters and law enforcement officers.

Firehouse dogs have greatly evolved in their roles within the firehouse. First appearing on scene as carriage dogs to now lovable educators and dedicated arson-sniffing pups, they are some of the hardest working pups in any business. The advancement of firehouse dogs and their skills have greatly transformed the way fire safety and firefighters approach emergencies. Though, there is one thing that has remained tried and true throughout the centuries of the firehouse dog and that’s their companionship and loyalty to the firefighters. They’ll do whatever it takes to show their loyalty and love toward the firehouse crew.

Dogs, in general, are eager to please and learn. Down the road, there’s no doubt firehouse dogs will continue to play an active role in fire and life safety, all while still being loyal to firefighters after all these centuries.